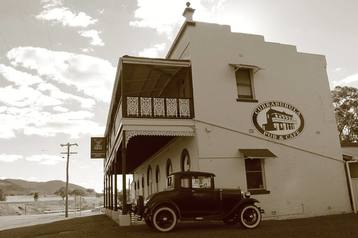 The Original licence was taken out by John Martin Davis around 1838 – he had to ride horse back to Port Macquarie to secure and renew the license – a round trip of 240 miles.

Davis was married to Sarah Wiseman, the daughter of Solomon Wiseman (Wiseman's Ferry). After reportedly exchanging his Piallaway run for the smaller adjoining Currabubula lot, Davis opened the Travellers Rest Inn and later changed the name to the Freemasons Arms Hotel – the first licenced hotel on the inland side of the Liverpool Range. Located 20 miles south-west of Tamworth, the Inn was ideally situated on the district’s only permanent water spring, which can be seen from the rear of the hotel and the entrance to Currabubula Pass. Marking a break in the Peel Range, which permitted easy passage of traffic between the Liverpool Plains and the Peel River Valley, the pass had been used by the local Kamilaroi people for centuries and since the beginning of white settlement in the area had become a focal point of tracks and road routes that converged at its entrance.

Commonly known as Davis’ Hotel, the popular establishment catered to the needs of the travelling public, including teamsters, bushrangers, travelling stock and later coaches, and from 1861 hosted the town’s first post office, with Davis as postmaster and a weekly horseback mail service to the stage coach station at Goonoo Goonoo. After his death from a horse fall in 1866 – Davis’ son Robert and wife Sarah carried on the hotel business until 1937 – exceeding a century of service to the travelling public.

Located at 1 Davis Street, the existing Currabubula Hotel, as it is now known, was built by Robert in 1910 on the site of the original structure and was subsequently sold to another Davis (of no relation to the hotel’s founders).

As you can imagine, there's a wealth of history attached to the Hotel. Have a quiet drink in the bar and you will likely come across a 'local' (some are fifth generation farmers) who will have a story or two for you. Stories from the personalities to the account of the robbery of the hotel by Captain Thunderbolt that was printed in The Sydney Morning Herald, Saturday 26 March 1921:

After remaining in control of the Davis family for 102 years, the hotel has changed hands on a number of occasions and had eventually become run down and in desperate need of attention. Following the sale of the hotel in 2013, it was closed for renovations and re-opened in 2014​.

On 1 April 2015 the new Hotel was bought by Tamworth locals, Wayne Smith and Kathy Dodd, who look forward to the next chapter of the Currabubula Pub & Cafe's history ...